Winner of the 2018 Letten Prize

In March 2018 the Young Academy of Norway and the Letten Foundation launched the Letten Prize. The purpose of the prize is to recognize younger researchers’ contributions in the fields of health, development, environment and equality in all aspects of human life. The prize of 2 mill NOK (ca. 215 000 EUR/260 000 USD) will be awarded biannually to a young researcher under the age of 45 who is conducting excellent research of great societal relevance.

The Letten Prize – a global prize for young researchers

“From the onset our goal was to create a global prize,” Magnus Aronsen, leader of the Young Academy of Norway, explains. Along with the rest of the Board of the Letten Prize, he is content with the result:

“We did hope to reach a broad audience of young researchers, but we were rather overwhelmed by the response. We had not expected well over 200 applications! With a number of excellent researchers from medicine, sociology, biology and law to name but a few disciplines, the committee has had a challenge task!” 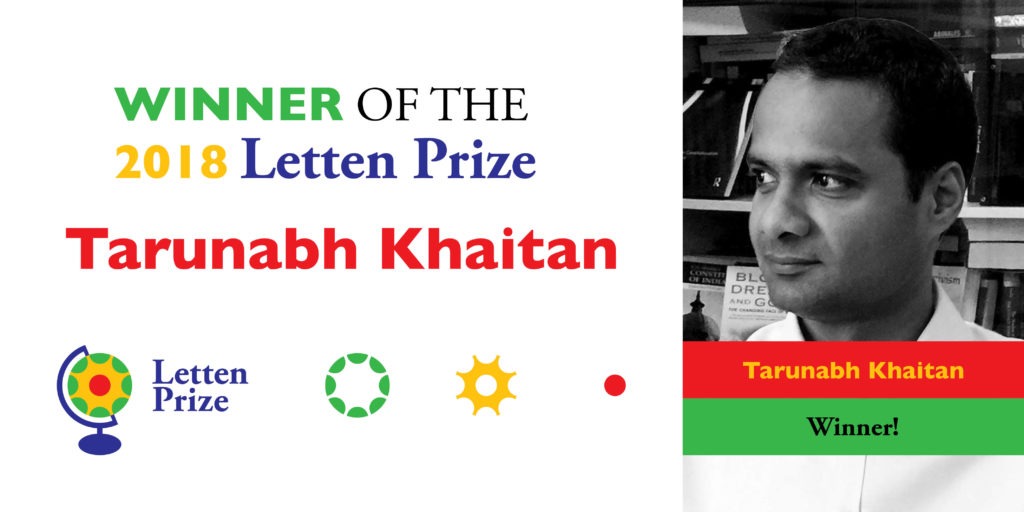 Winner of the 2018 Letten Prize

From the impressive diversity of applicants, a unanimous committee shortlisted five candidates, from whom Tarunabh Khaitan was chosen as the winner:

“Tarunabh Khaitan (from India) is affiliated with the University of Melbourne and Wadham College, University of Oxford. He works across several disciplines including discrimination law, constitutional law, legal theory, political philosophy, democratic theory, constitutional design, and ethics. In his scholarly activities, Khaitan has brought to the fore the stark and unjust inequalities that characterize present day society, not only in his native India but also in other countries. His engagement extends way beyond his academic publishing: he has been active in mentoring young academics from the global South, and founded India’s leading academic law journal.  He has written numerous articles for Indian newspapers and actively disseminated his research in other media. His work has had an impact on law in India as well as in Europe and thus on the society at large.

Khaitan’s achievements meet all the criteria listed in the call for the Letten Prize. He has conducted groundbreaking research on the root causes of inequality and injustice – a research that is undoubtedly of great relevance and that addresses one of the major challenges of present-day society. His work bears on several of UN’s Sustainable Development Goals, not least goal 10 (reduced inequalities) and 16 (peace, justice, and strong institutions). It is clear that his research has had – and will continue to have – an impact across national borders. His research is truly interdisciplinary in nature, and his proficiency in science dissemination is well documented. His work serves as a sterling example of research that combines scientific excellence and rigor with a true social engagement. Tarunabh Khaitan will stand as a worthy recipient of the 2018 Letten Prize.” For the full quote, see Winner of the 2018 Letten Prize.

Responding to the news Khaitan notes: “I am very grateful to the Letten Foundation and the Young Academy for this Prize, which I hope to use towards contributing, in a small way, towards a vision of an India free from unfair discrimination. This ideal, reflected in the principled pragmatism of Dr Ambedkar, the chief architect of India’s pluralistic Constitution, has been a guiding light for my scholarship. I would like to think that Professor Letten F. Saugstad—a refugee herself, who appreciated the role of scholarship in social transformation—would have approved.”

The runners-up for the 2018 Letten Prize

In alphabetical order, the runners-up for the 2018 Letten Prize are:

Read more about the runners-up.

Celebrating the winner, runners-up and addressing how research can help solve global challenges, join us for the Letten Prize Days 12-13 September.

Would you like an interview, get in touch with: